In recent years, more and more developers and website owners are losing their heads over the awesome concept of headless, or decoupled, Drupal.

Among all Drupal releases, Drupal 8 is the best suited to headless architecture. This is due to its built-in web services which are named among the most trending achievements in Drupal’s evolution from D1 to D8.

OK, we’ll now see what lies at the head of the “headless” approach, how it works in Drupal 8, and what its benefits for website owners are.

Projects that are born from the decoupled approach can be amazing beyond any imagination. The headless or decoupled architecture implies that Drupal serves as a powerful back-end (or data source) and entrusts the front-end (or presentation) part to some other system.

Usually, it is some ultrafast and dynamic application built with the help of one of JavaScript frameworks and libraries (Angular, React, Ember, Gatsby, Node, Ember, Elm, etc.), an iOS or Android mobile app, or another 3rd party app.

The part users directly interact with is non-Drupal. They do not see the Drupal front-end theme (the so-called “head”), hence the term “headless.” However, in addition to full decoupling, the approach of “progressive decoupling” is gaining momentum. It implies that Drupal still handles the front-end but entrusts some of its components to the power of JS.

With the headless approach, you can do all this and more:

Considering the benefits, it is no wonder that “the best heads” of the Drupal community set up a major Drupal 8’s web service initiative (WSCCI) to make “the great eight” ready for headless architecture out-of-box.

We are now happy to say that there built-in web services In Drupal 8 designed to be the connecting link between Drupal and another system.

They help output Drupal’s data in JSON, HAL+JSON, XML or other non-HTML formats that are easy to “consume” for apps. This way, systems that are different can communicate, cooperate, and bring out the best in each other.

In addition to the core, there are helpful contributed modules like GraphQL, REST UI, JSON:API Extras, Subrequests, JSON-RPC, Decoupled Router, Consumers, Consumer Image Styles, which offer additional decoupling opportunities and are at the center of the community’s attention.

Use the decoupled Drupal 8 to your benefit!

OK, it’s time to use the exceptional opportunities that headless or decoupled Drupal 8 can provide for your website. Let’s discuss it, and our Drupal developers , and our developers will bring your ideas to life with the great level of skill that these projects require.

Signs showing that your web project requires a discovery phase 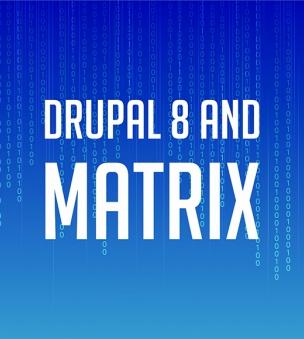 Drupal 8 and Matrix chat rooms: communication of the future