From Drupal 1 to Drupal 8: an exciting journey to history

We all love success stories, because they convince us that everything is possible, and that the most amazing projects all start as just cool ideas — in garages and dorms, in friendly chats or even in dreams... There are lots of examples in history, and one of the most vivid is Drupal, a powerful CMF with over 1.8 million websites running on it. Now that the world enjoys Drupal’s latest release, Drupal 8, it’s hard to believe there was ever a Drupal 1. But there was! Let’s take a look at Drupal’s history, and the process of its evolution from Drupal 1 to 8.

Drupal: where the history starts

Back in 2000, two Dutch students, Dries Buytaert and Hans Snijder, set up a wireless bridge between their dorms and shared an ADSL connection between themselves and six other pals. Dries created a small local site with a message board to let them to communicate with each other and discuss technology ideas.

But how to insure they never lose this communication after graduation? By putting this internal site online!

Dries added more code there, and the interesting site attracted a larger audience of developers who wanted to share their ideas and loved experimenting. Eventually, Dries registered his project as open-source, which meant that everyone could modify it and be a contributor.

The lucky typo that gave us Drupal’s name

History knows many cases when the most creative ideas come accidentally from things like a typo! When choosing the domain name, Dries was thinking about dorp.org (from “dorpje”, the Dutch for “village”) but misspelled it into drop.org. When he discovered his typo, he realized it was a fortunate one.

This gave a start the whole concept of the little drop, as well as to Druplicon — the famous logo in the form of a drop with "infinity" eyes and a playful smile.

When registering his software, Dries back-translated “drop” into Dutch and we got “Druppel”, or “Drupal”, which sounded more international.

History and evolution: from Drupal 1 to 8

A remarkable day in web development history! Drupal 1.0, which came on January 15, 2001, immediately had the modular structure that we all love our little drop for. However, the core modules were only 18, and each of them was just a PHP file. The first release had simple but flexible themes. The functionality included search, blog/diary, comments, calendar and more. Version 1.0 relied heavily on SQL for database changes.

Just two months later, Drupal 2 came out with its 22 core modules. It had the translation functionality, letting developers overwrite their site in another language using the special t() function. Other improvements included a permission system for users and groups, user ratings, and more.

The third version rushed in after half a year with a core of 26 modules and a brand-new concept — the concept of nodes as opposed to web pages. All content (articles, news, forums, diaries and more) were created as nodes and handled by the Node module. Nodes later became the mobile development basis underlying principle.

The fourth “smart drop” became complex enough to come in installments. Version 4.0 appeared in June 2002, and versions 4.1-4.7 kept coming into 2007. They introduced the appearance of the Taxonomy module as a handy content organizing tool, a friendly user interface and the WYSIWYG editor that opened Drupal to users with no technical background, and a wealth of other lucrative improvements. Almost 100 famous sites were built with Drupal by then, and the community rapidly expanded across the globe.

An awesome present for Drupal’s sixth birthday, D5, came exactly on January 15, 2007. In addition to the core, it already had as many as 2,500 contributed modules. It featured jQuery, a JavaScript library that made development way easier. Other new niceties included pre-created customizable Drupal packages, an improved CSS management to speed sites up, an enhanced directory structure and so much more.

Over 7000 contributed modules in addition to the 34 core ones, 600 custom themes, a completely rewritten menu structure, lots of drag-and-drop features, enhanced security, a handier installation process, RTL writing support — these were just a few benefits of D6 coming out on February 2008. Among websites using it appeared Whitehouse.gov, which became the visiting card of Drupal’s strengths. D6 websites are still numerous. However, the community’s policy is to support only 2 latest versions, so Drupal 6 website owners should now consider an upgrade or aditional support.

Ten years after D1, there came D7, creating another landmark in history. It was used for absolutely any kind of websites (from blogs to large corporation sites). Its figures reached overwhelming levels of over 11,000 contributed modules, 600 themes, and 200 distributions. Everything was now an entity easy to manipulate — from content types to taxonomy and users. The interaction between nodes and modules improved, the accessibility got better, and the seventh version became significantly more flexible and easier to use.

November 19, 2015, became the day when every drupaler held their breath in excitement. D8 came out with its enhanced multilingual features, inline content editing, the Views in core, incredible mobile-friendliness, better theming with Twig, the new level of web accessibility, improved markup with HTML5, built-in support for web services, modern PHP, Symphony and OOP adoption, and plenty of other innovative features. It deservedly began to be called a CMF (content management framework)! Minor versions come every six months, and backwards compatibility promises to make migration to Drupal 9 (and beyond) a breeze!

This has been a glimpse into Drupal’s history and evolution. The history looks rich and the future looks bright for the awesome drop as it evolves with the latest trends.

If amazing things start with small steps, maybe one of these for you will be contacting our developers and discussing your migration to Drupal 8, or your new shiny website. Amazing things sometimes start with a small click, which we invite you to make right now ;) The why’s and how’s of uninstalling Drupal modules 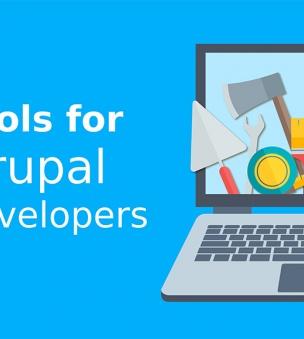 Web resources that help developers work on their Drupal 8 projects